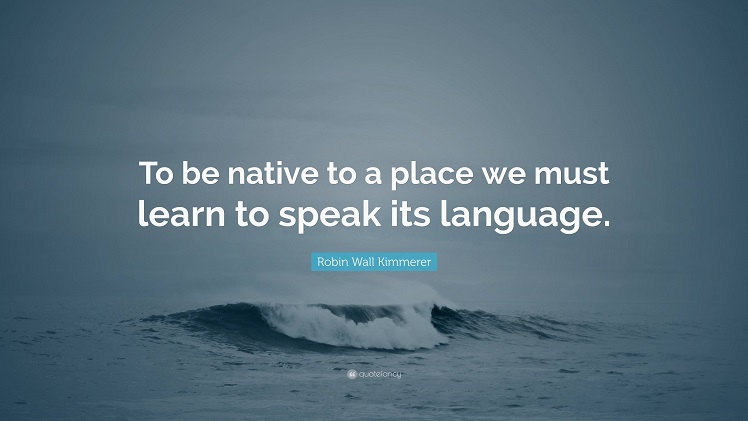 I come here to listen, to nestle in the curve of the roots in a soft hollow of pine needles, to lean my bones against the column of white pine, to turn off the voice in my head until I can hear the voices outside it: the shhh of wind in needles, water trickling over rock, nuthatch tapping, chipmunks digging, beechnut falling, mosquito in my ear, and something more—something that is not me, for which we have no language, the wordless being of others in which we are never alone.

After the drumbeat of my mother’s heart, this was my first language. I could spend a whole day listening. And a whole night. And in the morning, without my hearing it, there might be a mushroom that was not there the night before, creamy white, pushed up from the pine needle duff, out of darkness to light, still glistening with the fluid of its passage. Puhpowee.

Listening in wild places, we are audience to conversations in a language not our own. I think now that it was a longing to comprehend this language I hear in the woods that led me to science, to learn over the years to speak fluent botany. A tongue that should not, by the way, be mistaken for the language of plants. I did learn another language in science, though, one of careful observation, an intimate vocabulary that names each little part.

To name and describe you must first see, and science polishes the gift of seeing. I honor the strength of the language that has become a second tongue to me. But beneath the richness of its vocabulary and its descriptive power, something is missing, the same something that swells around you and in you when you listen to the world. Science can be a language of distance that reduces a being to its working parts; it is a language of objects. The language scientists speak, however precise, is based on a profound error in grammar, an omission, a grave loss in translation from the native languages of these shores.

Previous The Liver and Gallbladder
Next Music Listening, Music Therapy, Phenomenology and Neuroscience