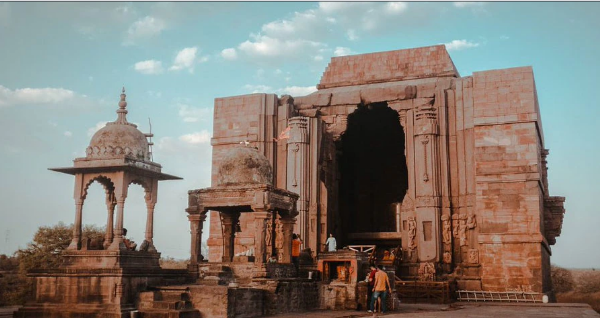 The Story Of Unfinished Bhojeshwar Temple

Famous for its unfinished structure, Bhojeshwar Temple, near Bhopal in Madhya Pradesh, boasts the tallest Shiva lingam in India and the world. According to ancient folklore, the temple construction began in the 11th century by the ruler of Malwa. However, the temple was left unconstructed as Raja Bhoj shifted his concentration and resources towards the famous Somnath temple being invaded by the Mughals.

And before he could take up the remaining construction work of Bhojeshwar temples, he departed, and the construction stayed incomplete. Even though the temple remains unfinished to date, it is still a mesmerising structure, offering stunning vistas of the Betwa river. So next time you plan a trip to central India, don’t forget to rent a car in Indore and head out to explore this stunning architectural wonder.

Nestled on a quaint hillock with the peaceful Betwa River on one side, the Bhojeshwar temple makes for a breathtaking view. And vast wheat pastures add a soft golden hue to the stunning landscape. Furthermore, the Bhojeshwar temple was merely a large mound of stones and rocks for several years. Moreover, the initial excavations revealed that the plan was to construct more temples in this area – like a temple complex in Khajuraho.

On removing the rocks, people came to know that the roof had a gaping void. For 1000 years, the Shiv lingam was open to the atmosphere with water streaming down every monsoon, and the lingam was impaired. Only later did ASI (Archeological Survey of India) manage to restore it to its ancient glory.

As part of temple restoration, new stones had to be engraved in the spot of missing stones but had to be bare as per world heritage guidelines on monument restoration. Furthermore, one pillar post was missing, a 12-tonne stone was called from Agra, and the best artisans worked to make the pillar match the original structure.

A glance at the Bhojeshwar temple architecture

Unlike other renowned temples in India, such as Trimbakeshwar Temple, Mahakuta Temples, and Kamakhya temple, decorated with intricately engraved sculptures, the walls at Bhojeshwar Shiva temple is plain with a front facade featuring idols of apsaras, gods and goddesses. The temple’s roof is decorative, with a structure in the form of concentric rings. In addition, quite similar to the heritage temples in Khajuraho, there are four pillars of the Bhojeshwar temple, and the walls seem to have been set later.

Or maybe they got recently resurrected as they look too dull compared to the rest of this ancient temple. The temple is constructed on a giant platform, as was prevailing in those days. On the right flank of this temple is a ramp, likely used to carry stones on the platform for building the temple. Furthermore, the outer fence on the right-hand side of the temple contains some stunning unfinished artwork, offering a peek at how the work progressed as the temples were constructed in ancient times.

Bhojpur usually holds similar climatic conditions as Bhopal. It means the summers here are harsh, and the stone encompassing the temple makes the floor excessively hot to walk on. Therefore, monsoon and winter is the most suitable time to visit this Shiva Temple. Also, the ideal time to visit here is early morning or late evening when the weather is cooler, and you can spend more time admiring the surrounding natural attractions.

The Bhojeshwar temple near Bhopal as it is one of the tallest Shivling in India, constructed out of a single rock. A tour of this unfinished heritage site would leave you in awe of its magnificence. So if you are looking for a quick weekend getaway, book a Indore to Bhopal taxi and head out to glimpse this mesmerising Bhojeshwar temple that would leave you spellbound with its architectural amazement.

Previous The Mini-LED Display: A Bright Idea For Your Business
Next 5 Fascinating Facts About Jeetwin